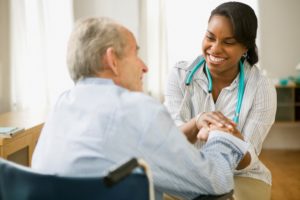 “Sorry to bother you, but…” Ask any doctor, and they’ll tell you this is how a conversation starts 99% of the time. Patients have it in their heads that speaking to a physician is a waste. Docs have better things to do with their days than look into something which probably isn’t a life-threatening issue. And, no one wants to be the person that hindered the care of someone else in need. Better to self-diagnose and self-medicate than make someone angry.

Put like this, it sounds absurd that patients can think this way yet this is the perception. So, is it possible to bother a doctor?

No – It’s Better To Be Safe Than Sorry

A typical interaction with a medical professional ends the same way. The person, who was panicking about their symptoms, was informed there is nothing wrong. The individual leaves the surgery feeling ten times healthier and in a great mood. The doc, on the other hand, spent five to ten minutes treating a person who didn’t need help. However, the average Joe on the street doesn’t have ten years’ experience at medical school and ten more in a live environment. As a result, you have to speak to someone who understands the human body when it does something irregular.

Yes – They Are Busy

On average, docs work nearly sixty hours a week treating patients and completing paperwork. To put this in perspective, a physician who started their residency at 29 and retires at 65 works twice as long as an ordinary employee. There’s no doubt they are busy, and that’s without the extras such as conferences, medical trials and court appearances (to give testimony). Some practitioners can clock 100 hours without breaking a sweat. The argument here is they don’t have the time to deal with frivolous health issues such as blocked ears. Use an ear cleaning guide or try a walk-in clinic. Don’t bother them

The counter-argument is straightforward – they have a duty of care. It doesn’t matter how busy they are because their primary role is to care for patients. There is no way to tell who is needier when the symptoms are benign. Anyway, it doesn’t matter because the Hippocratic Oath means there are no favorites. Yes, some conditions will require treatment right away, but they can’t turn people away because they are swamped. It’s the job and they accepted it when they took on the role of being a doctor.

Doctors care for people, but it doesn’t mean they like them very much. In fact, people often do silly things which make a physician’s life difficult. When a patient adds-on extra work, they are bound to get frustrated and hot under the collar. They are bothered yet they can’t show it outwardly. And, this applies when individuals begin to harass them out of the office hours.

Yes, doctors are saints and they sometimes wish patients would leave them alone. However, the big picture means it’s better to bother them and be safe than avoid an awkward interaction.